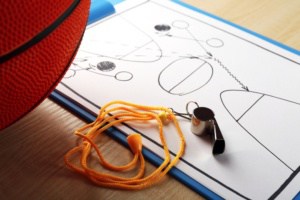 Like any game, basketball requires a certain number of tactics to be employed so that it can be one. This means offenses are designed a certain way, defenses are designed to accomplish specific results, and each player is responsible for certain positions and functions. If you’re just starting to watch or learn this game, it can be difficult to understand why certain players perform certain actions.

Offensive Tactics in the Game of Basketball


A good offense must be flexible enough to respond to changing defensive strategies. There needs to be a certain amount of spacing between players, but there must also be counter options to avoid defensive traps. Zone, spread, and motion offenses help to do this, but new players and fans should look for early offense strategies.

Early offenses respond quickly to circumstances as they occur. Once a player from your team gets the ball, they should look to push it up the court. The players without the ball should respond by widening the court, creating passing lanes for the player with the ball to recognize. Advancement down the court should be rapid, looking for an outlet pass that can create an easy basket opportunity.

When you can spread the defense out across the court, it makes it difficult for a zone defense to setup as you drive to the hoop. More man-to-man defense strategies are then employed, which allows your best players to break down the defense on an individual level and drive the lane or look for an easy outlet pass.

Another benefit of the early offense strategies is that if your initial push doesn’t get you close to the basket, you can reset to work toward a good shot. At this point, you would then look at creating a set offense, running a motion offense like Bo Ryan’s Swing Offense, or creating offensive zones to break down the defense.

Defensive Tactics in the Game of Basketball


There are a number of defensive tactics that can be deployed in the game of basketball. The goal of each defense is simple: disrupt the offensive plays in some way. There are three ways for a defense to be successful in the modern game of basketball.

There are three basic categories of defense that are usually deployed in order to create results in the game of basketball. Each tactic has its own pros and cons to consider.

When you’re first getting started with youth basketball, incorporating one basic defense can help your players develop their recognition and movement skills. If you’re new to watching basketball, look for the defensive alignment on the court and you’ll see how the defensive tries to be disruptive to the offense.

Then, as player skills develop, defenses can be changed throughout the game. A coach might start in a 2-3 zone, adopt a 1-3-1 zone to disrupt certain offense plays, and then throw out some man defense to be disruptive in unexpected moments.

Key Player Actions and Terms in the Game of Basketball


If you’re new to watching the game of basketball, you might hear someone say, “That player boxed out effectively.” What does that exactly mean? Or if you’re a new player and your coach says that you need to work on boxing out, what are you being asked to do?

Here are some common terms that you’ll hear in the game of basketball and what a player should be doing if asked.

Air Ball: This occurs when an offensive shot is taken, but the ball fails to make contact with the net, rim, or backboard.

Assist: When an offensive player passes the ball to another offensive player, who then makes an immediate basket, an assist will occur. This is one of the primary offensive statistics that is kept in the game of basketball.

Backboard: This is the rectangular piece of glass that is the foundation for the rim. A red square for judging a shot is placed on the backboard above the rim. Some personal-use backboards may be made with wood, polycarbonate, or fiberglass.

Block: This action occurs when a defensive player stops the shot of an offensive player before it reaches the backboard or is in the cylinder.

Fast Break. When a basketball play begins with a defensive stop, a player creates a fast break by passing to another teammate who is open down the court with minimal or zero defenders in their way. A shot is then created before the defense can react.

Foul: Whenever a player breaks one of the rules regarding offensive or defensive conduct in a basketball game, a foul may be called. When a foul occurs in the act of shooting, then the player fouled will be allowed to take free throws from the foul line. Baskets made while being fouled will count, with the foul allowing for 1 additional free throw. Baskets not made while being fouled will be given the number of free throws that a made shot would have scored. This means a made 3-point shot would be given an additional free throw, creating a 4-point play.

Foul Line: This is the line where free throws are taken. It’s 15-feet from the backboard and parallel to the end line.

Guard: A basketball player who is responsible for outside offensive opportunities and the initial line of defense. Most guards are positioned around the three-point line on both offense and defense.

Rebound: A rebound occurs whenever there is a missed shot. The player who grabs the ball first is given credit for the rebound in most circumstances. A tipped ball or immediate outlet pass may result in a team rebound instead of an individual rebound from a statistics standpoint.

Traveling: Players are allowed to take two steps while in possession of a held ball. Once they pick up the second step, they will be called for this violation of the rules.

Turnover: This occurs when the offense loses possession of the ball to the defense for some reason. Floor violations or losing the ball out-of-bounds are common turnovers in basketball.

With the right basketball tactics, it becomes possible to plan for a successful game. When you’re a player, this means you must know what your coach is asking of you. If you are new to watching the game, this will help you to better understand what is actually going on.

Don’t miss our tips for getting started!